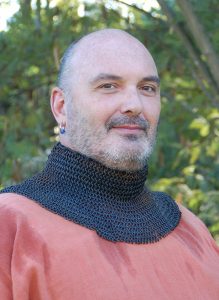 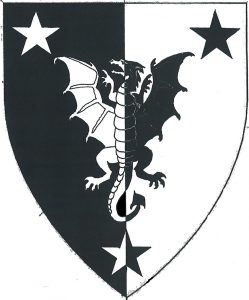 Per pale sable and argent, a dragon displayed between three mullets counterchanged.

I have been in the SCA for about 10 years, during which I have had the chance to take up rapier fighting, some archery, heavy fighting, metalworking, and some jewelry making. I am a fan of good food, sci-fi and fantasy books and movies, board games, and hanging out with people.

My persona is a German fighter that travels around offering his services for judicial duels (AKA trial by combat). I also have ties to the famous Landsknecht regiments formed by Macimillian I, the Holy Roman Emperor, so you will see me attired from time to time in their style of garb.

This officer is in charge of all Baronial rapier fighter practices and activities. They help new fighters with training and authorization. At events, they are responsible for rapier tournaments and marshals and communicating with the Minister of the Lists. This officer must be a warranted Rapier Marshal. This is a reporting office.